For this homework (because of the lack of materials to use)  I focused on how to control a motor with a potentiometer. I used few tools available and  in the end I made a self destructive robot.  I don’t know why but everything I make tend to the auto-destruction, which is kinda fascinating because this small robot reminded me the human nature.  So I started to do some research about it and I discovered that in the 1966 there has been the first Destruction in Art Symposium, the Symposium brought together many artists engaged in destruction in their work. 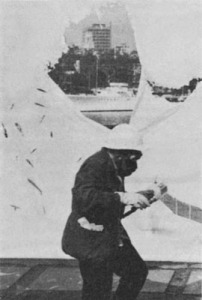 I think that in the ‘Maker” era the concept of “destruction” or “self-destrucion” can have a deep meaning. I am really interested in investigating it. Not only for the interesting outcome in terms of projects, but also for the deep political message that contains and the philosophical implications. the auto-destructive art in fact  is primarily a form of public art for industrial societies.

Can the auto-destructive behavior make robots more close to humans?

Lesson learned: even a small prototype about servo motors can blow your mind.

int potpin = 0; // analog pin used to connect the potentiometer
int val; // variable to read the value from the analog pin